No one can deny the momentum behind the rockers, Hunter Valentine, who are touring with Cyndi Lauper’s highly anticipated “She’s So Unusual” US Summer tour this year. Coming straight out of starring in Season 3 of Showtime‘s hit reality series The Real L Word, Kiyomi McCloskey said that the show helped increase their fans outside of the United States.

Like all great love stories, Hunter Valentine’s began in a dark, crowded bar when girl met girl and an unbreakable bond was forged over cheap beer and rail whiskey. Armed with a fake ID and a king’s ransom in talent, Kiyomi McCloskey was looking for a drummer and found her rhythmic soul mate in Laura Petracca. Eight years, two record labels, and three studio albums later, the band has solidified their line-up, put down roots in Brooklyn, and grown their fan base steadily across North America and the globe.

Famed Canadian producer and Treble Charger front-man Greig Nori produced their third album, Collide and Conquer. The 11 tracks on this album represent an eclectic mix of hard-hitting punk rock, indie-pop and love ballads. “This album has a lot more pop to it, it’s not just rock and roll. There’s a wide variety, the last one was a little more rock. Everyone’s personality is represented more on this album,” said McCloskey.
The bands latest release “The Pulse” is not a personal experience from McCloskey’s life but it’s a common story for many. “It’s more of an observational song. It’s basically about when marriage goes wrong and people stay in a marriage for 20 or 30 years and they’re unhappy. And it’s about the one person not being able to leave it just because they’re so used to [it] and the other person being like, what the f*** are we doing?”

With over 200 touring dates a year and multiple media appearances such as the cover of Curve Magazine, Huffington Post’s A-Sides, Revolver Magazine’s Hottest Chicks in Metal issue, a live TV appearance on Fox 5 in Las Vegas, and Time Warner’s “SoCal Sound“, it’s no surprise that Hunter Valentine executes their raucous brand of rock on stages in Canada, America, Germany, Austria, Switzerland, and the UK – with no plans to slow the pace. 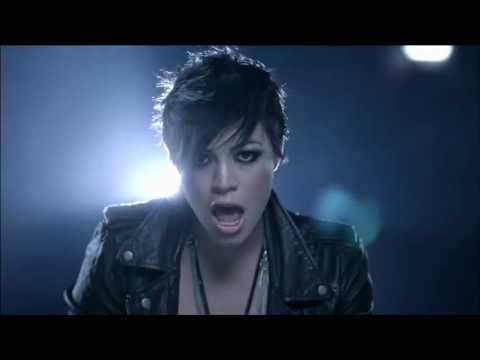