Chicas in the Afternoon 2022

DOOR ADMISSION: Please note that there is no set number of tickets available at the door. Door admission is only available if ticket holders do not show, which happens every year. Everyone with advance tickets has to be checked-in first and only then, the missing spots will be sold. Some people also sell extra tickets at the door when doors open at 4pm. Please be very careful with social media comments about sale of extra tickets. Do your due diligence and check the profile of the seller. These are often times scammers.

WELCOME BACK! Chicas garden party on Sun July 31, 2022, 4pm-9pm at Sheraton Wall Centre 1000 Burrard Street, Vancouver is so one-of-a-kind, we don’t even need to fill it with unicorns—but we do! Chicas is a grassy-lawn day club with pillows, picnic blankets, frosty cocktails, unicorn floats, new friends, forever friends, and phenomenal music—all just steps from Davie village. Invite anyone you like, everyone is welcome.

Back by passionate and popular demand, our 2022 headliner is Sandy Duperval. Sandy is an INCREDIBLE DJ and singer (she trained with Whitney Houston’s mom!). A Montreal native she now lives in Toronto, but if we dance hard enough, maybe she’ll move out west.

🦄All washrooms are gender neutral.

🦄Masks are not mandatory, but always welcome. 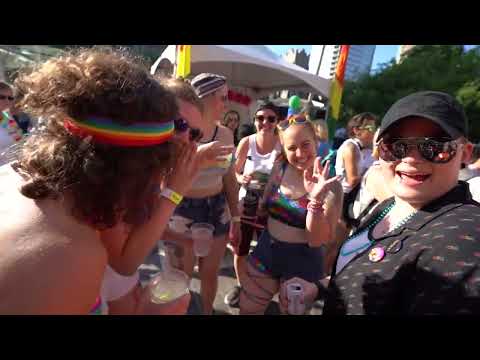 
She’s a Montreal native, but Toronto is where singer, DJ, and producer Sandy Duperval resides. Sandy is a devoted and passionate artist with over 13 years of vocal training, and has studied under the tutelage of the late legendary icon, Whitney Houston's mother, Cissy Houston. Since 2008, Sandy has been steadily working hard and gaining notoriety in the world of electronic music as a DJ/singer, playing in several countries around the world. Her performances have been touted as a one of a kind experience. By mixing live vocals over her DJ sets, Sandy leaves crowds from across the globe buzzing over the positive vibes resonating after each and every engagement.

Singing is Sandy’s primary love, and she touts Whitney Houston, Lauryn Hill, Tina Turner, Robin S, Crystal Waters, and Martha Wash as a few of her vocal influences. It was during her studies at College de Sherbrooke majoring in Jazz Vocals that she discovered the art of DJing. Under the mentorship of Hugo Lapalme, known for his exemplary DJing prowess in Quebec, she spends years improving her technique and jumps at the opportunity to demonstrate her skills in front of the camera on "Star Académie", Quebec's most watched reality tv show comparable to American Idol. However, it is her 7-year residency at the coveted evening spot College Night at Unity Nightclub that has established her as a bold and prominent DJ in the nightlife industry. Sandy is one of the very few DJ/singer artists in the industry, and it’s this unique combination that attracts events such as Montreal's own Diverscité and Pride festivals, as well as Toronto Pride's "Green Space¨ to book her as a main act to play for an average crowd of 10 000 people. As her star continued to shine, Sandy flourished and worked at some of the most respected clubs and opened for world renowned DJs such as Bob Sinclar, Showtek, Ruby Rose, Lil Jon, Carnage and many more.

Currently, Sandy is the official DJ for Universal Music/Republic Records rising star and Flo-Rida protégé Natalie LaRose, who has sold over 2 million copies of her 1st single "Somebody” Feat. Jeremih. She has toured with LaRose on the "Fifth Harmony - Reflection Tour" in over 30 cities across the USA, as well as attended and played at major events such as the US Open and "We Day", which was broadcasted live on American television. To add to her achievements, she was the headliner for the first Canada Pride, held August 2017 in Montreal.


Dj Rocket, an Indigenous LGBTQ Canadian DJ has been a professional in the music industry since 2002; as  a promoter, presenter, music producer, sound engineer and International DJ, she has worked with some of the best in the business.

First starting as a DJ in the UK, Riki has just over 8yrs tucked under her belt specializing in House, Rnb, HipHop, Electro & Indie. Her main international residencies were at the famous Candy Bar Brighton/London, Wild Fruit and Ghetto Brighton. She has played numerous clubs throughout the South of England and has played at festivals and events in Europe including Dublin, Gran Canaria and Zurich. Rocket has also showcased her talents outside of Europe when she was one of the headliners at the 'Bitch' parties for Sydney Mardi Gras in '09.

Over the years she has tag teamed with DJ's from Fabric/China Whites/Ministry of Sound/Digital/BBC 1 Xtra and opened for "Chicks on Speed" @ Brighton Pride and was chosen to play at a fashion shoot for Naomi Campbell.

Other accomplishments from England include nominations for best female DJ @ the prestigious Golden Handbag Awards, a co-host & DJ of 'the breakfast show' on Radio Reverb 97.2FM. After 3yrs of studying at Access to Music, Brighton UK she has now developed into a skilled producer.

Now residing in B.C., Canada - Rocket is the resident DJ for Flygirl Productions in Vancouver; Canada’s premier lesbian event producers known for their wildly successful parties “Hershe Bar”, “Chicas” and pride cruise “Chicks Ahoy!.” She continues to play with talented DJ's throughout North America such as Rhiannon/Betti Forde/Miss M/Kasey Riot/Saratonin/Amara and Soulfunkee. She has headlined at both Whistler and Vancouver Pride to packed clubs and continues to be at the top of her game.


Hailing from Vancouver BC, DJ Slade has been sharing her eclectic taste in music with audiences since 2013. Be it neo-soul, funk, old school hip hop and r&b, or contemporary pop favourites, she loves igniting that spark in a crowd’s soul and boosting it higher and higher. When she’s not behind the decks, DJ Slade can often be found performing with with the band, as Queer As Funk’s resident DJ.